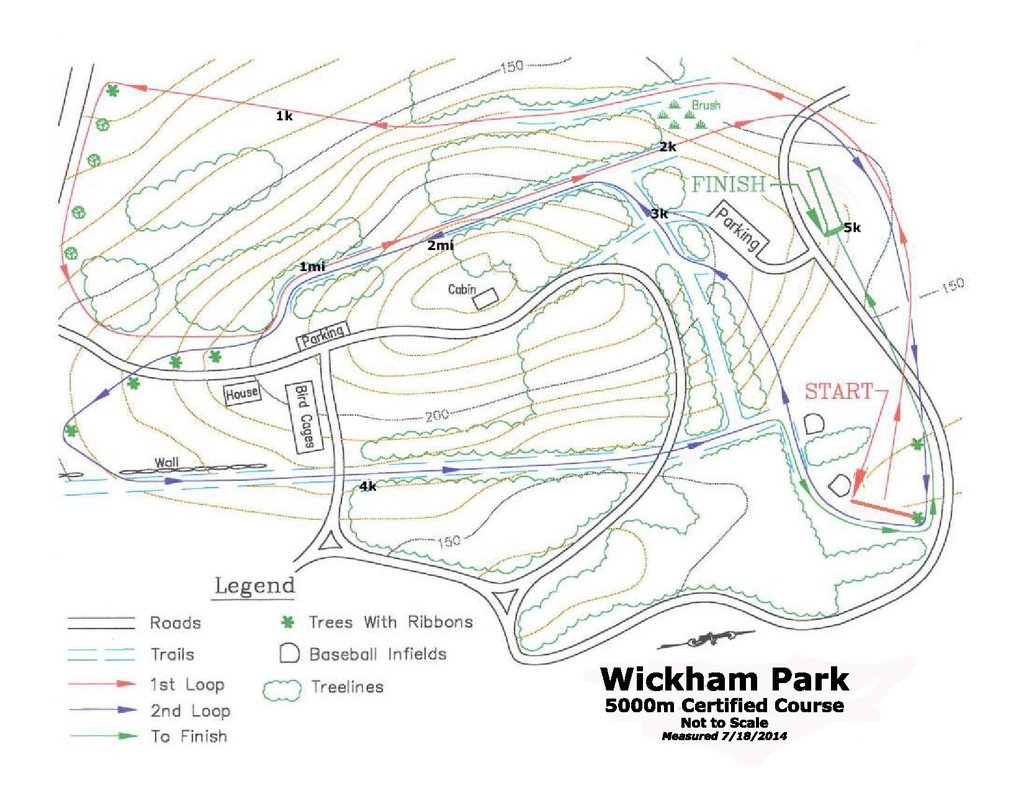 (Click on certain parts of the map above for a detailed look at the course in video and photos. Map provided by mysportsresults.com)

Wickham Park in Manchester will serve as the state cross country course this Saturday for high school runners. Photo by Pete Paguaga

“It’s probably the premier difficult course, maybe in at least southern New England,” Lobo said. “It’s kind of the mecca of distance running in cross country. At this time of the year it’s gorgeous. It’s a good challenge.”

Recently certified as an official 5,000 meter course this summer, Wickham Park will serve as the state championship course this Saturday, the State Open on Oct. 31 and the New England Championships in November for Connecticut high school distance runners.

Wickham offers a unique challenge to cross country runners with its variety, range in incline and famous ‘Green Monster.’

“One, you do have the hills, not only is it difficult to run, but it’s also you have to use strategy,” Lobo said. “You have to be careful with this course; if you go out too quickly, you’re going to beat yourself and you won’t have anything for the end.”

Above is a look at what the course offers and an interactive preview with video and photos of the entire park from the FCIAC champion Danbury boys cross country team and head coach Rob Murray. Or you can watch the full run-through below.

A little history and a certified course

Last year at the State Open, Staples’ Hannah DeBalsi finished the course in 17 minutes and 44 seconds. Darien’s Alex Ostberg, just a junior at the time, ran the third fastest time in 15:38.

“After seeing DeBalsi and Ostberg run so fast last year and with the New England Championship at Wickham this year, I approached course creators George Suitor and Bill Baron about the course measurement so that athletes were running over a certified 5km,” said Ron Knapp, who runs mysportsresults.com. “They both indicated that with the various changes in the course over the past several years, including the change from roads to wood chip trail, that no one had accurately measured the course nor provided permanent markers for the major turns not already indicated by a natural feature.”

PHOTOS: Preview of Wickham Park for the state championships

Knapp, a former designer of cross country courses at Hall and West Hartford Reservoir, enlisted the help of Jim Gerweck and Steve Norris who are both USATF Course Certifiers, as well as Amity’s Thom Jacobs and coaches Kevin Over and Jeff Gee to get the course certified this summer.

The Central Connecticut Conference Championships held last Wednesday was the first meet in the state to use the official course. This Saturday individuals with be utilizing the extended finish so the total course will be 5,020.

According to Knapp, the various courses at Wickham Park have been used since 1984 when class and open meets were held interchangeably between Timberlin Golf Course in Berlin and Wickham.

“The ‘Green Monster’ makes or break a lot of kids,” Lawrence said. “It’s a long stretch.”

The Green Monster is a gradual incline around the 3k mark of the course that then ascends into the woods.

But is the hill more hype that it’s actually cracked up to be?

“No, they’re right, it’s the hill,” said Wilbur Cross junior Danae Rivers with a laugh describing the most challenging aspect of the course. “It’s the hill and then there’s no downhill after the hill, it’s pretty constant, so you got to regroup and breathe again.”

“As far as going up it, the hill isn’t going to go move,” Lobo said of conquering it. “It’s just lean into the hill, use your arms as you go up, try and keep a steady pace as you’re going up.”

A pack of Tolland girls run toward the finish at Wickham Park last Tuesday during a workout. Photo by Pete Paguaga

The beauty of Wickham Park

“The more serious runners like this course,” Lawrence said. “They know they have to get used to it.”

Knapp said he doesn’t believe there is a single difficult part of Wickham, rather the combinations from nearly every stage factor into the challenge that makes up the 3.1 mile course.

“I think the whole first mile is the hardest part,” Coginchaug senior Christian Alberico said. “Because you’re not tired but you have to be careful you don’t go out too fast.”

Everyone thinks the Green Monster is the major obstacle,” Lobo said. “But you also have an extremely difficult 250-300 meter gradual uphill finish line. It’s really tests your mettle.”

Lobo explained Wickham provides individuals with an unrivaled running experience. His advice is to just go out and do the best you can.

“If you’re breaking 18 minutes you’re doing pretty well,” Lobo sad with a smile. “But I’ll have some kids come out and run their best time of the year on this course and that makes them pretty proud, and their coach.”

Sean Patrick Bowley and Pete Paguaga both contributed to this project

Sorry, there are no polls available at the moment.